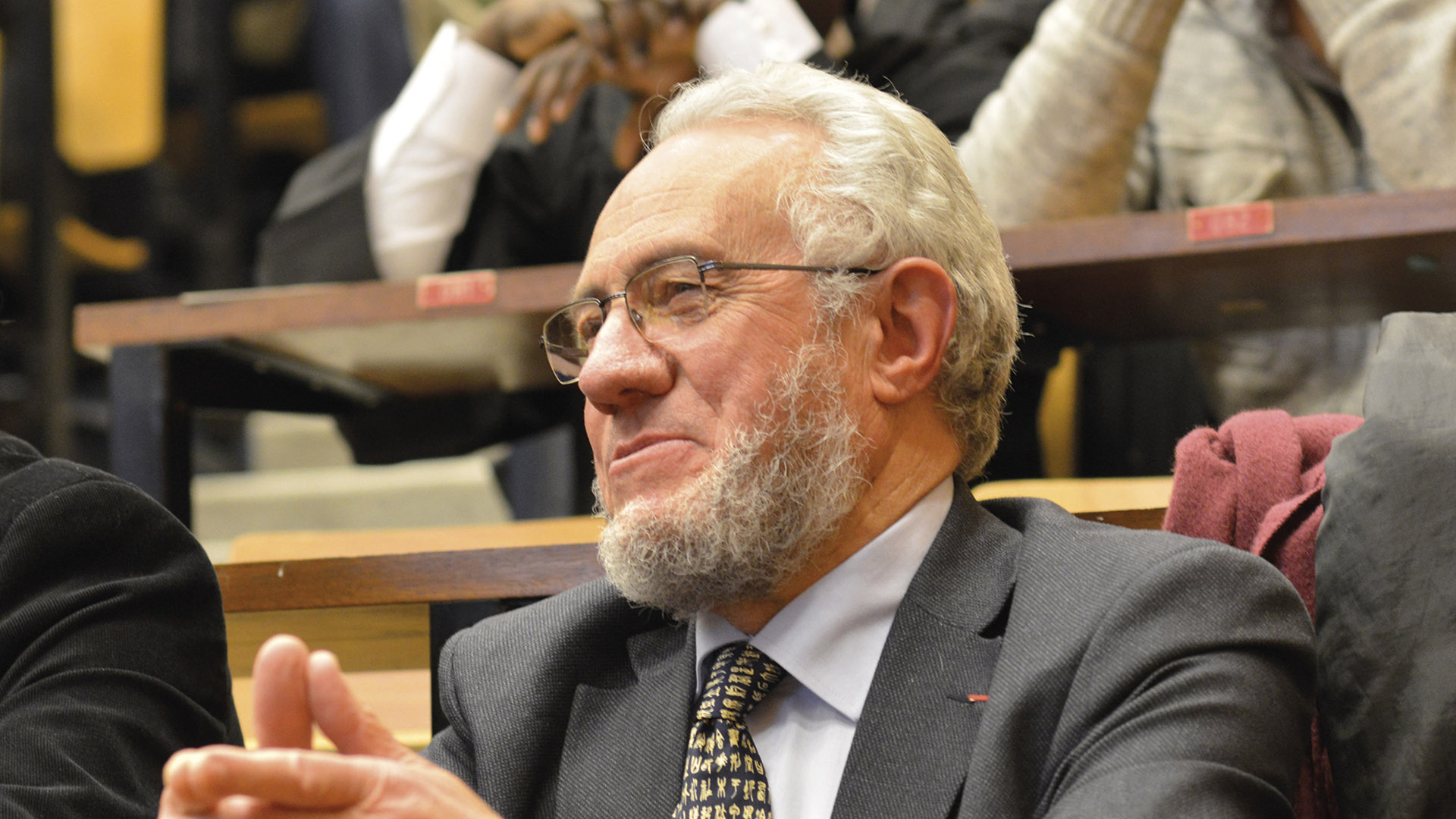 Paul J. Tréguer was born in 1942. He graduated at the Ecole Nationale Supérieure de Chimie of Rennes (France) in 1995 and at the Institut d’Administration des Entreprises of Rennes in 1966.   From 1966 to 1967, he was recruited as an engineer by the Département Etudes et Recherches d’Electricité de France (EDF)  at the Research Center of Les Renardières (Fontainebleau, France) to generate electric power at hot temperature in a magnetohydrodynamics based pilot plant.   In September 1967 he joined the Université de Bretagne Occidentale (UBO, Brest, France) as associated professor. He became professor at the UBO in 1989 and participated and managed research teams in chemical oceanography and biogeochemistry till is retirement in 2007. He then became emeritus professor at the UBO.

In 1976, at the UBO Paul J. Tréguer received the degree of Doctor es Sciences (oceanography) for his studies on the circulation of nutrients in the Moroccan and Western Sahara coastal upwellings, and in the North-East Atlantic surface and deep waters. Preliminary to this thesis, in cooperation with P. Le Corre, Paul J. Tréguer published in 1975 a renowned manual for the precise determination of nutrients in seawater using automated colorimetric methods, which provided an invaluable tool for generations of students and marine scientists. He then became a marine biogeochemist, expert in nutrient cycles in various marine ecosystems, with a focus on the silica cycle and on the biogeochemistry of the Southern Ocean. Since the 1980s he has participated in, or directed, international programmes dealing with the biogeochemistry and the impacts of climate change on Antarctic marine ecosystems. Among his many publications dealing with the Southern Ocean biogeochemistry is a synthesis paper (Tréguer & Jacques, 1992, Polar Biology) which, during decades, has provided to many researchers context and information fundamental to study the marine ecosystems of the Southern Ocean. In 1987, after a sabbatical period at the Oregon State University (OSU, USA), he launched an international « silica club » composed of scientists of France, the USA, the Netherlands and Japan. During decades this initiative has been very fruitful as attested by key publications of the members of this club in peer-reviewed international journals. Examples are : a world première for the use of the radio-isotope β- emitter 32Si to  measure the production of biogenic silica (Tréguer et al., Limnology & Oceanography, 1991), the silica cycle of the world ocean (Tréguer et al., Science, 1995), the production and dissolution of biogenic silica of the world ocean (Nelson, Tréguer, et al., Gobal Biogeochem. Science, 1995), the resolution of the opal paradox in the Southern Ocean (Pondaven, Ragueneau, Tréguer et al., Nature, 2000), the silica control of the CO2 cycle at global scale (Tréguer & Pondaven, Nature, 2000), the use of opal as a proxy of paleo-production (Ragueneau, Tréguer, et al, Global Planetary Change, 2005). This « silica club » has also served as a niche for preparing proposals that have been funded by the European Commission (e.g. The SINOPS Data Center, the Si-WEBS network) or for preparing contributions to international cruises (e.g. the European funded EPOS Antarctic cruises aboard the RV Polarstern, 1988-89, the NSF funded cruises in the Ross Sea, 1990-1992, aboard the RV Polar Duke,  and in the Eastern Equatorial Pacific: 2004-2005, aboard the RV Roger Revelle). -In 2013 Paul J. Tréguer revisited the world ocean silica cycle in the modern ocean to discuss the steady state hypothesis (Tréguer & De La Rocha, Ann. Rev. Mar. Sci., 2013). He re-launched an international « silica group » to favour convergence between experts of the silica cycle and of the genomics of diatoms and other marine silicifiers, also called SILICAMICS. After a contribution (chair of 2 silica sessions) to the AGU-ASLO Ocean Sciences Meeting OSM 2014 (Hawaii, September 2014) he initiated the SILICAMICS international conferences. The first SILICAMICS conference was hosted in October 2015 at l’Aber Wrac’h (near Brest, France), with the support of the EuroMarine Consortium, the Laboratory of Excellence “LABEX-Mer” and the Mediterranean Institute of Oceanography. Paul Tréguer chaired 2 silica sessions at the OSM 2016 (New Orleans). He is co-editor of the SILICAMICS special issue of Frontiers in Marine Science titled “Biogeochemistry and genomics of silicification and silicifiers”. He gave an invited conference titled “The role of diatoms and other marine silicifiers in the biological pump of carbon” at the 1st Gordon Research Conference on Ocean Biogeochemistry (Hong Kong, 12-17 June 2016), and then led an international review paper titled “Influence of diatom diversity on the ocean biological carbon pump “, published in 2018 in Nature Geocience. He chaired 3 silica sessions at the OSM 2018 in Portland (February 2018).   Paul J. Tréguer participated in 18 open ocean cruises in the Atlantic, Indian, Pacific and Southern Ocean aboard RVs Jean Charcot, Noroit, Nadir, Capricorne, Marion-Dufresne I and II, Polar Stern, Polar Duke and Roger Revelle.

Paul J. Tréguer  has been member of or chaired numerous scientific committees at national and international level. Examples are: (1) 1993-1997: member of the Group of Specialists GLOCHANT (Global change in Antarctica) of the Scientific Committee on Antarctic Research (SCAR), (2) 2000-2004: chair/co-chair of the Southern Ocean – Joint Global Flux Study (SO-JGOFS) appointed by the International Geosphere Biosphere Programme (IGBP), and the Scientific Committee on Oceanic Research (SCOR). (3) 1990, 1995, 2000: Paul J. Tréguer chaired/co-chaired three international symposia on the biogeochemistry of the Southern Ocean. (4) From 2005 to 2008 he has been the scientific director of the EUR-OCEANS Network of Excellence (NoE) (68 marine institutes, 20 nations) on the impacts of global change on marine ecosystems. This NoE, funded by the European Commission (EC), has been very fruitful (21 Ph.D. thesis, several key and synthesis papers, development of end-to-end ecosystems models, public outreach programme,…), generating in particular a number of funded programmes (e.g. EPOCA, EUROBASIN, EUROSITES, METAOCEANS, SESAME,…) (5) From 2009 to 2014 the EUR-OCEANS Consortium (20 marine institutes, 9 nations) was created to take advantage of the EUR-OCEANS NoE momentum. As a member of the Executive Committee of the consortium Paul J. Tréguer took the lead of initiatives on marine biogeochemistry and physics hot-spots issues (meso- and sub-mesoscales studies, de-oxygenation of the ocean, ocean acidification). He also contributed to the development of polar initiatives in close link with the ICED-IMBER programme. (6) From September 2014 to December 2016 Paul J. Tréguer has been a member of the Executive Committee of the EuroMarine Consortium (40 institutes, 20 nations) which favours the convergence between experts in biogeochemistry, genomics, ecosystem approaches of marine resources. (7) From December 2014 to October 2016 Paul J. Tréguer served as co-ordinator of the building of the  “Institut France-Québec de la Mer” which gathers the main forces of France and Quebec for marine sciences and technologies. Officially created in October 2016 this Institute organised a ”sea forum” held in Montreal on 8-9 May 2017. (8) Since years Paul J. Tréguer has been in touch with Chinese scientists to develop studies on the silica cycle in Chinese seas. In June 2015 he is awarded by the “famous international scientist” programme of the Ocean University of China OUC (Qingdao) to visit professor Su Mei Liu, to give lectures, and to coach Master and PhD students. In April 2017 Paul J. Tréguer served as a member of the international review panel of the “Key Laboratory of Marine Chemistry Theory and Technology” (OUC) lead by Professor Meizun Zhao. In 2018 he is awarded distinguished visiting “ocean star” scholar of the “State Key Lab of Ocean Satellite Ocean Environment Dynamics” (SOED) of the Second Institute of Oceanography (SIO) of Hangzhou (China). At the SIO, on 23-24 October 2018 he organized a “silica cycle” workshop to which attended more 50 scientists from 11 different institutes/universities of China and other countries.

Leading role in institutes or organisms at national level

In 1991 Paul J. Tréguer founded the plurisciplinary European Institute for Marine Studies (IUEM) which became in 2000 an Observatory of the Sciences of the Universe (OSU), under the umbrella of the UBO and of the Centre National de la Recherche Scientifique (CNRS). From 1998 to 2007 he has been nominated as Director of IUEM by the French Ministry of Higher Education and Research (MESR). The IUEM is a key player in marine sciences, at European level and beyond, not only because of the contribution of several scientists to key international programmes of marine sciences but also because of its contribution for building up the European scene (e.g. contribution in the European Marine Board).   In 2004 Paul J. Tréguer founded the Europôle Mer, a consortium of excellence which gathers 15 marine institutes, universities and schools of engineers of Britanny. From 2007 to 2012 Paul J. Tréguer chaired the Groupement d’Intérêt Scientifique (GIS) Europôle Mer, acknowledged and funded by the MESR. The Europôle Mer helps for the convergent efforts of its member organisations on research, higher education and transfer of knowledge to economy. It is also renowned for its prospective effort in marine sciences at large. An important output of the Europôle Mer is the creation of Laboratory of Excellence « Labex-Mer: a changing ocean ». Supported by the MESR and the CNRS the Labex federates for a decade (2012-2022) the research forces of the IUEM (Brest), of the Ifremer (Brest), and of the Ecole Centrale (Nantes), on 6 high priority interdisciplinary hot-topics in marine physics, chemistry, biology, geology, and geography. The Labex-Mer is now transformed in the “ISBlue” Graduate School for marine sciences (2018-2029) based in Brest.   Since 2012 Paul J. Tréguer has been President of the Strategic Committee of the Pole Mer Bretagne, a consortium that gathers the efforts of public organisms and of private companies to promote innovation in marine sciences and technologies.

LIST OF PUBLICATIONS : ARTICLES IN INTERNATIONAL JOURNALS (ALL PEER-REVIEWED)