Marine microorganisms (prokaryotic as well as eukaryotic) are the basis of aquatic food webs and represent the least explored compartment of biodiversity on Earth, despite being one of the most reactive and influential in terms of global ecology and climate change. Recent technological advances in high throughput DNA sequencing provide almost exhaustive and semi-quantitative data on the diversity of microbes in a given ecosystem. At the same time, new theoretical developments are addressing the issue of planktonic biodiversity. Within phytoplankton, based on a representation of the ecological traits of several dozen phenotypes competing for a limited number of resources, biodiversity patterns are studied in relation to a variable 3D hydrodynamic environment. Dynamic forcing makes it possible to identify the phytoplankton most likely to develop and thus define type “habitats”.

M2BIPAT project aims to use the Bay of Brest- near Iroise Sea as a natural laboratory to study the responses of the microbial ecosystem to contrasting environmental conditions. Associated with a very marked tidal front, it brings together, over a small geographical area, very diverse environmental conditions, estuarine and strongly anthropized in the Bay of Brest, eutrophic but mixed in the near Iroise area, and seasonally stratified or mixed offshore. 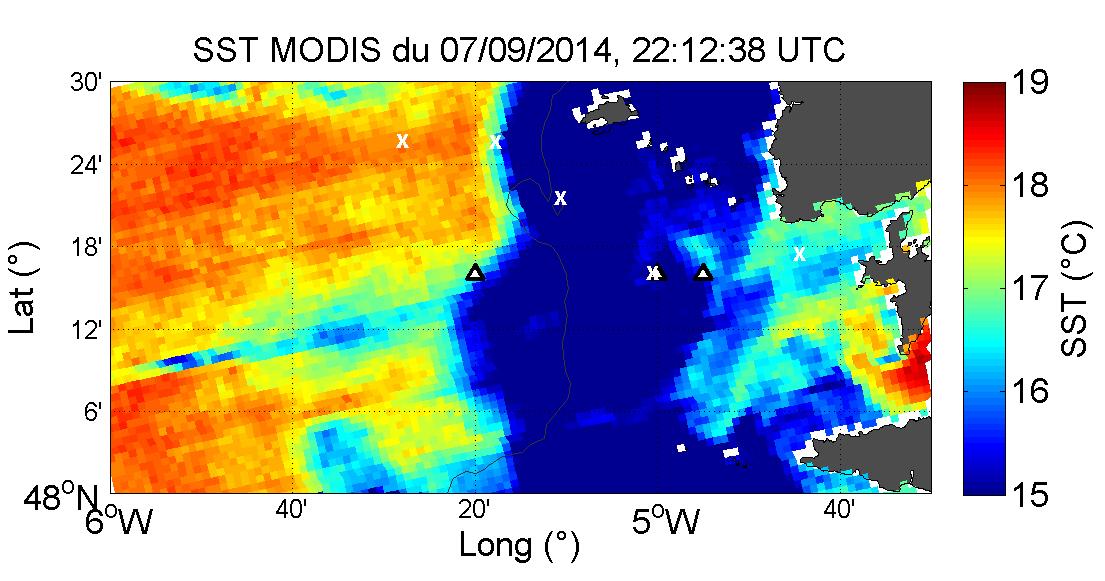 Position of the stations in the Iroise Sea performed on the vessel “Albert Lucas” in June 2014 (3 stations: triangles. First exploration campaign) and September 2014 (5 stations: cross, the station at 5°W – Pierres Noires – having been revisited. These 5 stations are the basis of the M2BIPAT program). SST highlights the highly mixed cold and stratified zone further offshore, beyond the outer front, as well as the warmer zone towards the coast ( internal front).

The M2BIPAT project combines an observational meta-barcody-type approach with physical/biological numerical simulations to monitor and understand the evolution of microbial biodiversity, more particularly phytoplankton (bacteria/procaryotes and eukaryotes) and to effectively study the feedback between the distribution of resources and substrates (growth limitations), first-orderly regulated by physics (here, small and medium-scale hydrological structures) and the composition of microbial communities.